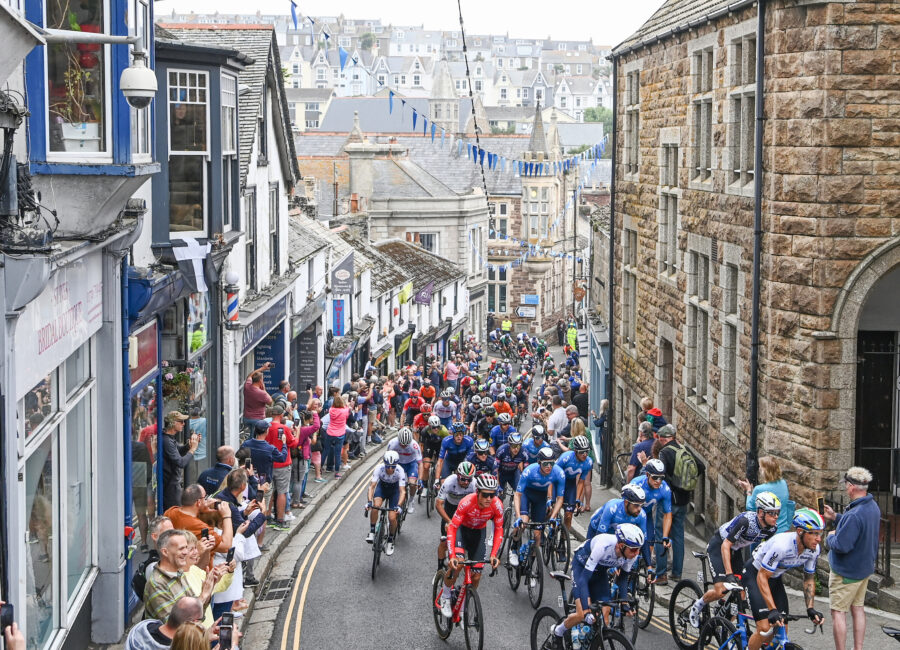 It will be a few weeks until the data is in, but first indications are that Cornwall’s largest-ever sporting event, the Cornwall leg of the AJ Bell Tour of Britain cycle race, had a record audience and gave a significant boost to the local economy after months of lockdowns.

Initial estimates show spectator numbers on 5 September to be in the region of  170,000. That would make it one of the biggest opening stage audiences race organisers SweetSpot has ever had, and certainly the largest crowd for an opening stage in the last seven years.

A detailed review of the day’s statistics and its economic effect will be carried out later this Autumn once the numbers are available, before any decision is made whether to consider hosting the event in the future. Cornwall Council’s investment in the race preparations was supported in part by business sponsorship from local firms the Isles of Scilly Steamship Group, Butterm!lk, Talent Tide, Cornish Lithium, Shore Partnership and Foot Anstey.

The Cornwall stage is expected to have drawn a return of at least £3.4 million in extra Sunday trading for everything from accommodation, taxis and transport, retail and catering on what was for most the last weekend of the summer holidays.

The event had worldwide TV coverage on Eurosport, live UK coverage on ITV4 and BBC Radio 5 Live, and saw sports and news crews, photographers and journalists from across Europe and elsewhere describing Cornwall to their readers and viewers.

Stephen Rushworth, Cornwall Council’s Cabinet Member for the Economy, said: “Although there will be an economic benefit to Cornwall, let’s not forget the non-monetary value of the Tour of Britain. The reminder to everyone that cycling is free and freeing, good for our mental and physical health, and Cornwall is the ideal place for both sports cycling and for leisure.”

“We should also recognise the ‘feelgood factor’ of thousands of people lining the route, cheering and enjoying each other’s company, and celebrating with neighbours and their community. I enjoyed the day immensely, and I think most of Cornwall did too.”

Linda Taylor, Leader of Cornwall Council, added: “It is rarely you get a countywide uplift of spirits in a single day, but everyone I saw from the start to the finish was wearing a broad smile and cheering. After the G7 summit as a political event, we’ve now shown the world how well we can host a great sporting event too. My thanks to all the organisers, the spectators, and of course the riders, for a day of great joy.”

Following the G7 summit in June, the Tour cycle race is seen as another strong showcase for Cornwall.

Pauline Giles, Chairman of Cornwall Council, presented the unique Saint Piran award, carved from Cornish sustainable oak, to stage winner and Tokyo 2020 Silver Olympic medalist Wout van Aert. Pauline said: “Standing on the podium in Bodmin for the winners’ presentations made me feel very proud of the enthusiastic and professional show Cornwall had put on for the Grand Depart stage of the Tour of Britain.”

“There are many teams to thank other than those amazing riders – the event organisers SweetSpot, our own Highways and Cormac experts, police, medics, the project management team, and all those community events that added so much to the atmosphere and celebration. A day we won’t forget for a very long time. I was able to watch the race on a big screen, and felt so proud of our communities who embraced this event, bringing joy to many after the hard 18 months we’ve endured.”

To add to the race action there was a wide range of community events from theatre to amateur cycling to live music to garden parties. Cycling superstar Mark Cavendish said in Penzance: “Starting our national tour is exciting. I hope the sun comes out in Cornwall today because I know it’s a beautiful part of the world and it’ll be nice to ride it. It’s going to be hard, it’s up and down. There’s no flat here is there?”

In the event the weather was a mixture, with west Cornwall misty and damp, but later as the peloton headed east there were higher temperatures and bluer skies.

Local VIP Andrew Ridgely, who with the late George Michael was one half of pop duo Wham selling more than 30 million records in the 1980s, is a keen cyclist and lives near Wadebridge. He said at the race start: “I think there will be a fair degree of excitement along the way with a good turnout of people, and lots of people at the finish. It’s a good day out for the good folk of Cornwall and the cycling community especially.”

Among other local celebrities spectating were Olympic rowing medalist Helen Glover MBE and her husband TV naturalists Steve Backshall MBE, who married near Penzance, and with their children tweeted the peloton passing through the town’s Market Jew Street.

Cornwall’s traffic management went as planned, with thousands observing the ‘no parking, no stopping’ clearways, and only a few incidents where parked vehicles had to be moved for the cyclists’ safety. Highways and Cormac’s traffic and park & ride preparations were among the most complex part of the whole operation – even Bodmin’s steam railway provided free seats over the weekend to ease parking problems. 60 police motorcyclists carried out a rolling road closure through each community in advance of the race’s arrival. Apart from a minor collision involving three riders near Lanivet the race passed without injury or incident.

There will now be a focus on legacy from the Tour, and constantly improving Cornwall’s cycling facilities. A planned cycle hub near Newquay Airport has been given the go-ahead, and the 200 km West Kernow Way off-road coastal circuit opened last week to encourage the growing ‘bike-packing’ phenomenon.