Cornwall marks countdown to the Tour of Britain 2021 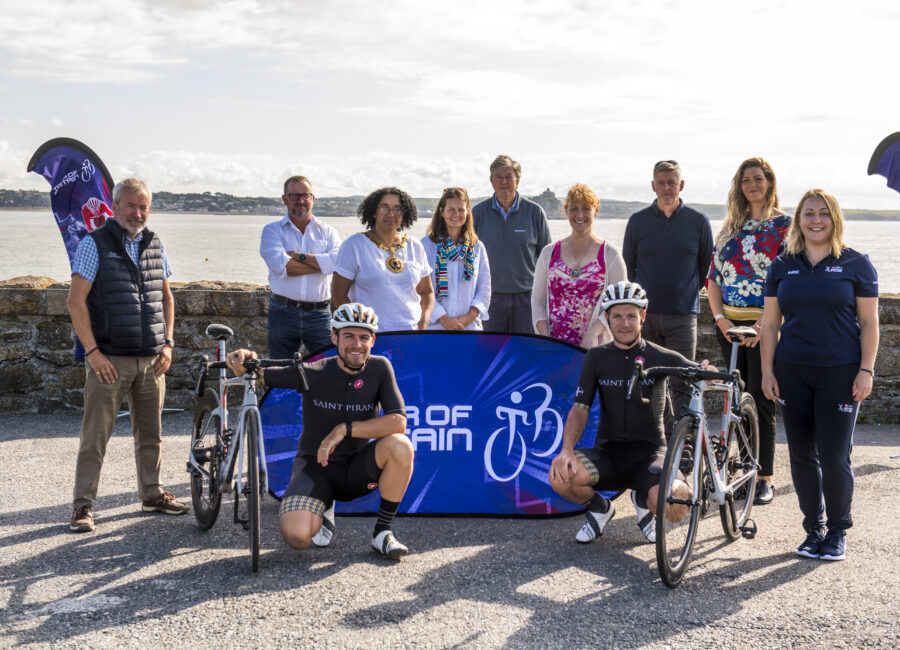 Councilors and dignitaries from Cornwall Council and Penzance Council have today marked a year to go until the Tour of Britain gets underway in Penzance by confirming more details of the route for the first visit by the race to Cornwall.

Cornwall will now host the Tour of Britain for the first time on Sunday 5 September 2021 with a 183 kilometre (113.5 mile) opening stage from Penzance to Bodmin.  The route embraces some of the iconic rural and coastal landscapes of Cornwall as well as showcasing historic towns and includes St Just, St Ives, Hayle, Camborne, Pool, Redruth, Falmouth, Penryn, Truro, Newquay and St Austell.

Cllr Tim Dwelly, Cornwall Council’s portfolio holder for culture, economy and planning, said: “Having the Tour of Britain in Cornwall offers us a chance to show our wonderful corner of the world off to a global audience and will provide even more reasons for visitors to come here and add a much-needed boost for our towns and our tourist industry next year.”

“We will also work to ensure we create a long term legacy from the event by raising the profile of cycling in Cornwall and motivating more people to cycle and lead healthier and active lives.”

Penzance Mayor, Cllr Nicole Broadhurst, said: “We are very excited to be hosting what is the UK’s premier road cycling event. It gives us a chance to showcase Penzance on an international stage and officially celebrate the re-opening of our iconic Victorian promenade, which residents and visitors to the town have enjoyed for generations.

“The event also provides something for people to look forward to and our local businesses a lift after the months of uncertainty and restrictions due to Covid-19. It is a brilliant opportunity to bring the community together, celebrate our wonderful town, and promote the health benefits of cycling for everyone.”

The Tour of Britain stage will be the largest free national sporting event ever hosted by the Duchy with live television coverage of the whole stage broadcast in the UK and around the world and an estimated economic impact of over £3 million for the Cornish economy from hosting the opening stage.

“It is fantastic news not just for those of us lucky enough to live in Cornwall, but it will also attract visitors to come down to celebrate the start with us and provide an economic boost at the start of the late summer season,” said Malcolm Bell, Chief Executive of Visit Cornwall.

“This is without a doubt the most highly anticipated Grand Depart of all for the Tour of Britain” said Hugh Roberts, Managing Director of organisers SweetSpot.

“It is special to be able to mark the countdown with our colleagues from Cornwall Council, Penzance Council and all of the other partner organisations working towards what we are sure will be a memorable occasion not just for Cornwall but for cycling in Britain, and of course help to shine a light on the fantastic cycling routes and facilities that there are in Cornwall.”

From Penzance Promenade the route will head across the Penwith Peninsula to St Just, hugging the coast to St Ives, Hayle and Gwithian before turning inland to Camborne, Pool and Redruth.

The route passes the beaches of Falmouth and Pendennis Point offering the peloton spectacular views across Falmouth Bay before heading towards Penryn and on to the city of Truro.

The impressive Truro Cathedral will be clearly visible from the route through the city, which then crosses back to the north coast to take in Newquay and Newquay Bay.

Having passed through the centre of St Austell, the Tour of Britain will visit the world famous Eden Project, with its twin biomes in a reclaimed china clay pit forming the backdrop.

The race enters the closing kilometres to Bodmin with the inaugural Cornwall stage finishing outside the historic Bodmin Keep in the town, with a 700 metre uphill drag to the line with an average of 4%.

Present at the event in Penzance were elite Cornish cyclists Steve Lampier (Helston) and Chris Opie (Truro) from Saint Piran Pro Cycling who have both raced in the Tour of Britain in the past.

“The Tour of Britain starting in Cornwall is a childhood dream,” said Steve Lampier.  “It will be the biggest sporting event to have come to the county and will showcase everything that is great about Cornwall.

“It was so unfortunate that the race couldn’t be held this year, but that just means we’re looking forward to 2021 even more.  At least we as Saint Piran can get a second bite at the cherry and all being well get to race it with Chris Opie for a Cornish team on home roads.”

Commenting on the announcement, British Cycling Chief Executive, Julie Harrington, said: “The Tour of Britain is a wonderful advert for our sport and it’s always incredibly exciting to see the race visiting parts of the country for the first time. Cornwall Council will have a spectacular route in store for us at next year’s Grand Depart, and I’m sure that cycling fans from across Britain will already be excitedly planning their weekends by the sea!”

The 2021 Tour of Britain is due to take place between Sunday 5 and Sunday 13 September 2021, finishing in the city of Aberdeen, with Devon, Warrington and Cumbria among the other confirmed host venues.

The Tour of Britain is British Cycling’s premier road cycling event, giving cycling fans the opportunity to see the world’s best teams and riders competing on their doorstep and helping to build a great cycling nation.